Doctor in Information Society and Knowledge by the Open University of Catalunya. Technopolicy project coordinator of the research group Communication Networks and Social Change at the Internet Interdisciplinary Institute since 2011 at the UOC. Participant Datanalysis15M research network. Investigate the emergence and evolution of movements in the network society from a perspective located and interdisciplinary, crossing different analysis methodologies. I also work with models and emerging forms of participation and democracy in network.

In recent years I have published several books and articles on the 15M as a doctoral thesis under the title, the final draft of Master “Emergence, evolution and effects of motion-red 15M (2011-2015) A techno-political approach..” “Moviments moleculars to ciutat-xarxa” (UOC, 2012), the book “Technopolicy, Internet and R-evolution” (Icaria Editorial, 2013), or articles as “multitudinous identities: a qualitative and network analysis of the 15M collective identity “(Information, Communication & Society),” Mobile ensembles: The use of mobile phones for social protest by Spain’s indignados “(Routledge, 2013) with John Postill,” 15M: Event, collective movements and emotions network “(Vanguardia Dossier , 2014) with Javier Toret, or the “Reinventing democracy in the network society” (IN3 Working Paper Series, 2013) by Ismael Peña-Lopez and Rodriguez Adrià.

I have given several public presentations and lectures as “YoSoy132, a new paradigm in Mexican politics?” XXXI in 2013 LASA International Congress of the Latin American Studies Association in Washington DC. Latin American Studies Association. Washington DC (2013). “Technopolicy and 15M The power of the connected crowds A new paradigm of distributed policy..” In: 15Mp2p (Papers and Productions): Meeting transdisciplinary 15M. Program Communication and Civil Society (IN3 / UOC) Barcelona (2013). Also training sessions have taught the graduate course “Election observation and electoral assistance” (UPV / EHU, 2013), in the Master Universitari in Participació i Polítiques Locals (UAB, 2013), at the Escola d’estiu: Els Béns Comuns: An alternative to Binomi Mercat-Stat? (IGOP, 2012).

Participant in numerous projects and collective initiatives such as the Ateneu Candela in Terrassa or the Nomadic University. Since 2011 I have also participated in several initiatives 15M as Democracia Real YA and Acampada Terrassa, as well as with other groups and subsequent initiatives linked to 15M. 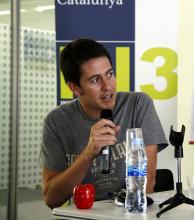