Subjugating or empowering? The dual role of mobile communication media in a guaraní community in greater Buenos Aires

This paper concerns the intercultural relation between mobile Information and Communication Technologies (ICTs) — produced in global, corporate networks — and mobile users situated in sociocultural localities. Research focuses on Argentina where indigenous peoples have brought attention to the subjugating influences of communication media diffused in their communities, asserting the right to communication with identity. This struggle has largely played out over mass media, and a number of indigenous communities have obtained licenses to FM radio frequencies to broadcast local contents. While mobile ICTs facilitate user-created contents, the extent to which this empowers users or democratizes content production is questionable as mobile service provision (Goggin, 2011; Gurumurthy, 2010) and internet sharing platforms (Fuchs, 2009) are intimately connected to capitalist market goals, and the underlying structure of communication technologies are embedded with Western and East Asian cultural codes (Srinivasan, 2012).

This paper argues that issues relating to the democratization and decolonization of communication media need to be further explored in respect to new media, and that the production of mobile ICTs within globally managed systems creates a problem for digital inclusion studies in respect to cultural relevance. The notion of communicative ecologies (see Hearn & Foth, 2007) is used to conceptualize the positioning of mobile media and mobile ICT use within wider communication and sociocultural contexts, in this case, other communication technologies and media, traditional communication practices, and decolonizing agendas. Research results will be presented from a case study with a Guaraní community situated in the metropolitan area of Buenos Aires, approximately 35 kilometers from the city centre. The community, comprised of roughly 100 members, has been active in indigenous communication rights movements, and in 2013 obtained an FM radio license with a reach of 12 kilometers.

The case study explores the role of the community radio along with other locally and externally produced media accessed on mobile ICTs in the community’s advancement of the right to communication with identity. Initial field research was conducted between October and December 2013, which involved indepth interviews with the community leader and participant observation alongside the leader at a series of indigenous political and communication events. Further research is planned in June 2014 which will involve semi-structured qualitative interviews with community members, of a variety of ages, relating to the mobile communication media they access, produce or transmit (such as apps, radio, web pages, text messages) as well as how they perceive the role of ICTs and digital contents in respect to decolonization and cultural revitalization.

Results intend to elaborate the role of mobile media in the community, and where relevant, identify features of mobile ICT services that enable/disable the production of locally relevant media, or align (or not) with decolonizing agendas. Research contributes to an increasingly important study area on new media inclusion, relating to the manner in which the globalized (and Westernized) production of ICTs can represent or be inclusive of minority cultures. 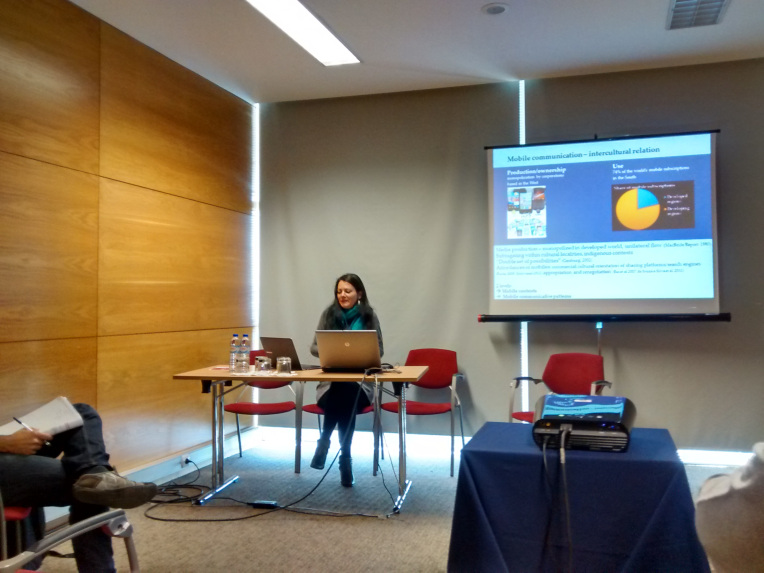